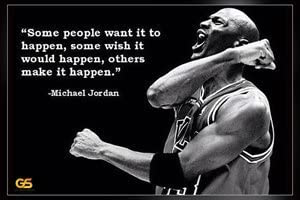 Last night, I finished the Micheal Jordan 10 part series documentary, The Last Dance. Growing up with a brother who is a huge MJ fan, I was always very taken by his magnetism and larger than life persona. While I did not live during his playing era and therefore was unable to watch his games, I felt that the documentary provided very deep insight into the life of Michael Jordan and his journey in the game of basketball. In the final episode, Jordan stated the following line, the very inspiration for this blog post: “Why would I worry about missing a shot I haven’t even taken yet?” The quote was followed by former Chicago Bulls coach Phil Jackson explaining that the single most important thing that set Michael apart from anyone else in the NBA is that he was always present to the moment. Not thinking about the game before, or the one to come. He was always in the now.

If you are wanting something to happen for you in your life- a dream, a job, a new body, a new mindset, and the list goes on…..you must be willing to make it happen. You are the only person who truly knows what you want. And you are the only person who can truly make it happen. My favorite motivational speaker Mel Robbins talks about how nobody is on their way to come and make things happen for you. Only you can do that. And, it turns out, making things happen for ourselves is a heck of a lot more rewarding than having someone else do it anyhow.

The secret lies in consistency. Be intentional about your decisions. Mel Robbins’ “5 Second Rule” philosophy is that our life comes down to 5 second intervals at a time. Our brain only needs 5 seconds to go from action mode to overthinking. We all know what we should do. The funny thing is, is that we know essentially everything that we need to do to make most of our dreams happen. The trick? Actually doing them. Day in and day out. Whether it is that you need to get up early to work on your business, your fitness, your expertise in a certain field, time with your children, etc. you know what to do. Many people quit once they have encountered the taste of failure. But failure is often needed to some degree before we can succeed. Take it from Michael Jordan, arguably the greatest athlete of all time. He says that the REASON he was so successful, was because he encountered failure on his way to glory.

When we become excited by the fact that we have the knowledge of what we need to do to make our dreams happen, it makes the doing of those things much easier and likely to happen. We have been given this one life. The time is now. Don’t spend your days merely wishing and hoping. Spend them making your life happen. Greatness, dreams, and success are not easy. But they are certainly worth it.

One thought on “Make It Happen”